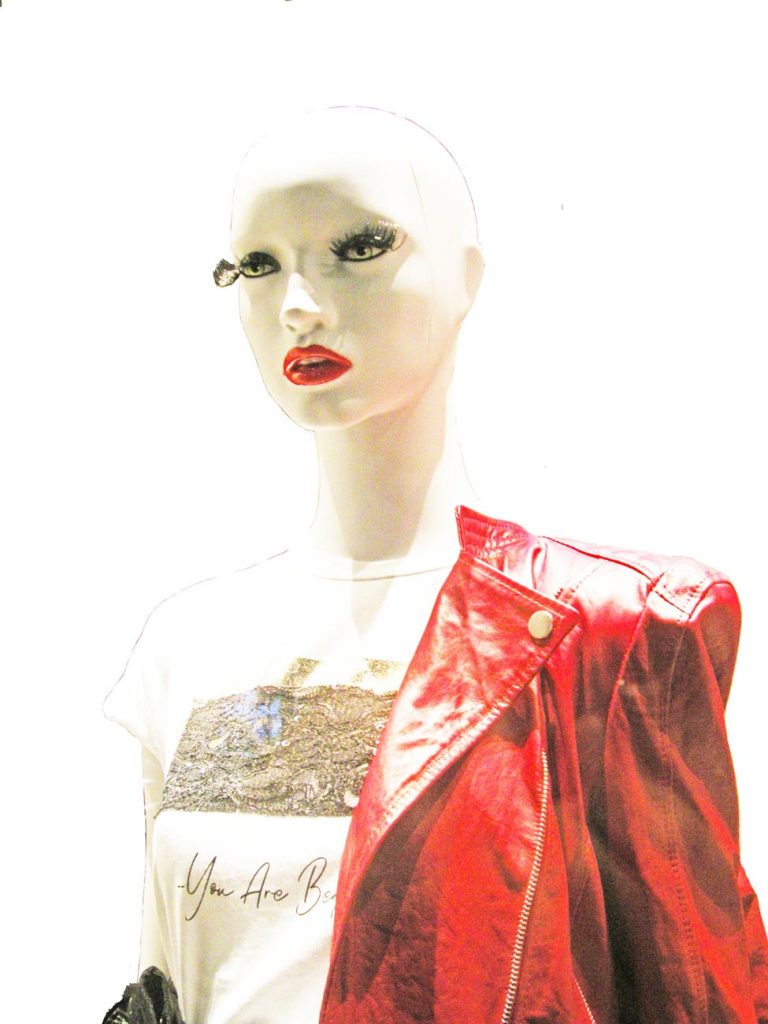 Milan is the city of fashion … you know … A favourable starting point to have a number of shop windows populated by SILENT ACTORS speaking by their gestures to passers-by.

The mannequins are placed in windows to INCREASE SALES; ATTRACT THE CONSUMER’S ATTENTION. These reasons impose that the CUSTOMER’s tastes are satisfied and his needs, aspirations are stimulated. Manniquins propose implicit models of behaviour fitting clients’ external shells of “self-representation”. Each of these anthropomorphic objects, put in the hands of the window dresser, turns into a character who MUST communicate a clear and strong message to the observer. This special kind of character must hit the TARGET of each commercial / clothing company (in this regard, I recommend reading the numerous publications by Prof. Vanni Codeluppi and Mauro Ferraresi, as well as the canonical-classic text by Roland Barthes The fashion system).

Mannequins fascinating a certain type of buyer can decisively reject another one, for age, social or cultural reasons, and personal tastes.

They are a particular species of actors playing “characters” with the task of encouraging purchases through a subtle, occult work of persuasion. Such an action is accomplished thanks to the solicitation of desires/deficiencies / gaps to be filled … social ambitions … of oneself, or narcissistic aspects present in each of us.

The enforced silence to which their inanimate condition condemns them, paradoxically, increases the evocative power of their existences and “unspoken”, unexplained stories, left to the imagination of the public.

The observer imagines himself in those clothes, builds and adapts to his own lifestyle the implicit “story” told him by the mannequin, suggested by colours, cut, and combination of the clothing, becoming THE DESIRED OBJECTS.

Depending on the quality of the clothes, and/or the ability to create a character according to the brand, the mannequins can be heroes of kitsch or champions of elegance. Posh or pop. They are condemned to perform with exaggerated, refined, cloying, predictable, glamorous poses.

Despite the banality of the material the mannequin is made of, he transforms himself into a silent actor capable of inducing the observer to enter the shop and perhaps buy what he was looking at (or rather an identical model, mannequins are rarely “undressed” to dress the customer directly ).

Depending on the level of the product, the brand, and the logic of the single store chain, as well as the taste of the seller (in the case of independent stores), the mannequin has a more or less strong “personality”.

In this context, my Urban Dramaturgy project focuses first of all on the mannequin’s gestures, on the poses assigned to it-him and on the Imaginary evoked/created.

Here are some starting questions… :

Have you noticed that there are shops choosing more or less realistic mannequins, while others are using busts and headless trunks? This crowd of headless wearing clothes does not make shivering us… we are not in the presence of Mary Stuart’s or Marie Antoinette’s ghosts …

These questions – strictly connected to the sociology of consumption and communication, to the fashion marketing – are the foundations for a first phase of “Silent actors” project. In this one, the poses will be studied and the changes over time will be photographed.

Since I wish to focus attention on the mannequin-character, I will propose a gallery of silent actors on a neutral background, enhancing their poses. This gallery of figure-statues testifies and reflects the desires, the codes of behaviour, the “fashionable” attitudes, up to date of a period. They are trails, traces of habits and experiences of a contemporaneity destined to be “archaeological” the next moment when it has now become “past”.

After this study, I will choose by contrast the most suitable urban place to decontextualize each glamour-character, the desired-object.

In this second phase, the mannequins are placed in very different landscapes than the glossy and unreal universe in which they usually “live”. The glass box of the showcase disappears thanks to photographic post-production interventions and the silent actors are placed in a completely different context. The most degraded urban realities, the neglected, forgotten corners of the city centre, the abandoned spaces, the saddest, sloppy, unkempt, badly used urban spaces will be the new shop-windows.

The shots are taken in key dates for the fashion system. Shop windows give their best to push sales at Christmas, New Year’s Eve, St. Ambrose and Fashion Weeks (in autumn and spring), these are the great occasions to look around and find Silent Actors just posing for us…