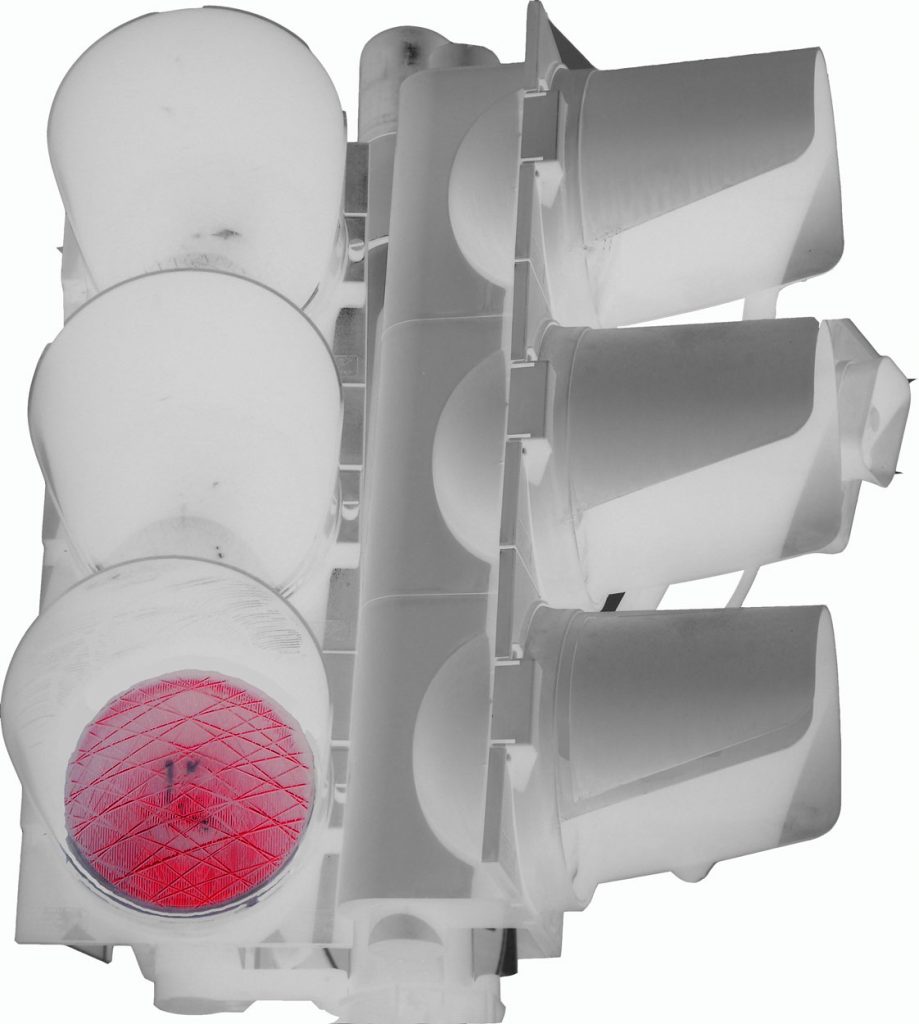 An intersection regulated by a traffic light is a key place in the city landscape. It is a presence with which everybody meets many times during the day, along familiar, little-known or completely new streets.

It is a place involving different aspects and levels,

to the concepts of “crossing”, “overcoming”, “role”,

as well as the dimension of waiting,

and positions of power …

Each intersection regulated by a traffic light is a stage on which countless micro-pieces take place: the absolute protagonists are pedestrians, cyclists, drivers and their vehicles. The act of crossing, in itself, has the characteristics of a drama and not so much (or not only) due to the possible risk of being overwhelmed by those who ignore precedence and rules of the driving code…

The regulation of the flow creates a circular situation based on the sequence: waiting-suspense-denouement, or if you prefer, on motion-stasis one.

The tension is increasing, in some cases it becames spasmodic (for example if you are late), depending on the arrival of the green light – the permission to move, to get to the other side, that is to say, to reach the desired opposite side, on which we can resume our path, literal and metaphorical speaking. This tension alternates and coexists with the suspense characteristic of the moments in which the orange light appears, as a prelude to the new arrival of red and its stop signal.

The orange light feeds the sense of challenge, the hazardous actions avoiding the immobility imposed by the return of the halt sign.

As an anticipation and a warning of the upcoming stop signal, the orange highlights a “thrilling moment”. The one in which we move knowing that our freedom of movement is near to run out, but we ignore how much time is left. The instants flee in the countdown needed to reach the goal, in safety.

The tension characterizes both the movements to be made in the “short time” of the orange light (without knowing / being able to quantify it), and the obligatory waiting imposed by the red one. It creates an ascending climax, followed by the denouement determined by the green light.

The permission to cross the road reach the new landing on the opposite sidewalk can be greeted with a sigh of relief. This happens before a new sequence restarts, identical to the first but involving other people-characters.

This is a circularity evoking the myth of the eternal return … 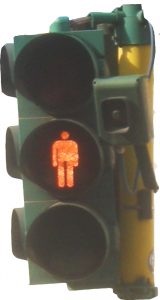 Unlike simple pedestrian crossings, the one regulated by a traffic-light becomes a “time trial”. But it is important to underline that the time available remains unknown to most passers-by and drivers, especially if they are casual visitors of that specific place. In fact, the traffic light combines the concept of intersection with the limitation one, imposed by the automated programming of the flow movement. The light tells you when you can or cannot cross and in how much time. You must abide by rules, precise codes of behaviour (red=stop, green=go, orange=accelerate if you are crossing, stay or run if you are about to cross).

You have to wait for the “permission”, and the right time to cross the river-road to go to the other side and continue the journey in the network of the streets-canals. This permission is granted according to a plan of traffic regulation and traffic lights synchronization.

The time of each phase, whose precise duration is unknown (who starts timing how long the green, red, or orange lasts?) is the ingredient determining the suspense effect.

The traffic light embodies a hidden and necessary “power” at the disposal of the authority (the Municipality), used to regulate flows, to protect the lives of citizens (pedestrians and drivers).

It is an automatic supervisor. It imposes order on what would be a simple intersection independently managed by pedestrians and drivers.

It regulates the traffic for us, it helps to make the right decision, indeed it imposes it: red you cannot walk, if you do it, you do it at your own (and others) risk and peril. Green – you can go on. Add steps to your route. Orange: Hurry to finish the crossing, or stop if you are still far from the zebra crossing.

It limits personal freedoms in favour of the collective ones. It is accepted and interpreted differently, depending on the role of the users and their time.

If a driver runs through a red light he makes a very serious infringement, endangering the safety of others as well as his own.

A hasty pedestrian, crossing with red, on an empty street with a good view, try to challenge the standardized reaction times of the traffic light. He carries out a transgression entailing a risk for himself, an assumption of personal responsibility in exposing himself to a possible injury. But he does not arouse the community’s disapproval and moral (as well as administrative) sanctions, rightly awaiting the driver who does not respect red light for indiscipline, or distraction.

The role and the power relations among the citizens using the traffic lights are also fundamental aspects in the analysis of this urban “set”. The pedestrian is the “weak subject” to be protected, because he exposes his “NAKED” body, fragile in a potentially deadly path. The driver, closed in an iron box, running over the street plays the “bad” role, the “villain”, as opposed to the “good”, “innocent” passer-by. But thus does not mean that this last is always right…

Much more than a simple intersection, that one regulated by a traffic light is a place of fleeting, evanescent meeting among passers-by, explicitly and fatally regulated by “time”. Pedestrians go with the flow, they can’t linger in the middle of the road … they can’t “waste time”…How long do the meeting and the gazes last between two people walking in opposite directions and crossing on the zebra stripes?

The pedestrian crossing regulated by a traffic light has a great role as a symbolic point of contacts. It hosts casual, short encounters among passers-by, full of meaning: a gained or “lost” opportunity for mutual acquaintance, in other cases, a sudden and unexpected, familiar face’s appearance.

In an intersection regulated by the traffic lights, the pedestrian crossing is a free corridor, but “with a fixed time”. It is an ambiguous area: safe or very dangerous, depending on the moment, signaled by the variation of the lights, by the respect of the rules, or by their infringement. Reckless actions can be performed by both drivers and pedestrians. 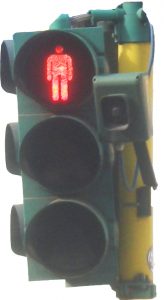 This “food for thoughts” about an intersection regulated by traffic lights constitutes the starting point for a Playwriting in the Urban Place project, in which different moments and situations will be considered, dedicated to this very common place of inhabited urban areas …

SET (WHERE?): the intersections of some zone of MILAN (Italy), chosen for their symbolic value and their role, both in the economy and geography of the city. The Crossroads are in central and peripheral areas, they can be large and small.

TIME (When?): Different times of day and night, different days of the week, different months and seasons, in the different streets and zones of the city. The urban landscape of pedestrians’ and urban walkers’ flows is very different.

In particular, I will study the posture of the body, the gestures of the passers-by-characters waiting to cross, the sequences of progressive tension and denouement, the transgressions, the forbidden steps, the fleeting encounters between people on the strips. I will observe the behaviours of humans engaged in this meaningful and at the same time so banal activity.

While crossing, you can walk without looking around, or looking at your “opposite”, you can adopt a hasty or slow gait, you can face the trials alone or in company.

Our (my) attention is focused on:

…The tension grows as time passes and the Green is expected to arrive …. THE TENSION GROWS …. GROWS …. it is now a matter of a few seconds …. – Liberating crossing.- Hurried steps to tread on the last portion of the pedestrians strips, to conclude the crossing … Hurry up, running to walk in the last available moments before the return of Red light and the stop. 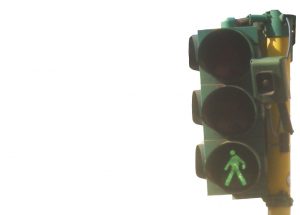